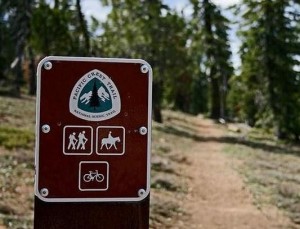 In calling for the establishment of a national system of trails, Lyndon Johnson (1965) declared, “The forgotten outdoorsmen of today are those who like to walk, hike, ride, horseback or bicycle. For them, we must have trails as well as highways. Nor should motor vehicles be permitted to tyrannize the more leisurely human traffic.”

Officially completed in 1993, the PCT is a treasure to the outdoors community. When the trail was closed to bicycles in 1988, cyclists were a relatively new presence on backcountry trails, and both the USFS and trail users were either unsure how to regard the appearance of cyclists on the trail or fearful over the prospect of dealing with a new and unknown challenge. With little experience managing bicycles, and with cyclists having virtually no organized presence or influence at the time, the USFS took what it viewed as the cautious and least contentious step of temporarily closing the trail to bicycle use. Through an oversight, the temporary closure solidified into a permanent one without further review.

Twenty-two years later, the Forest Service, Bureau of Land Management, National Park Service and many state and local agencies — the same agencies through whose land the PCT runs — have learned how to manage multiuse trails. So too has the trail-using public. Hence it is time to reassess the usefulness and relevance of the temporary 1988 closure order that banned bicycles. 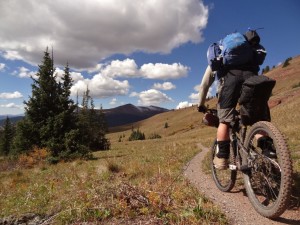 The PCT is loved by many, and for many different reasons. Whether your goal is adventure, solitude, exercise, physical achievement or freedom, the PCT can provide it all. Understandably, trail users have deep personal, emotional and even spiritual connections to the trail and to the lands that surround it. “My trail” is a sentiment often expressed by PCT trail users and we think that people’s sense of ownership and strongly felt care for the trail’s welfare are valuable. But the PCT is nevertheless a public trail that belongs to the entire community of quiet non-motorized travelers, including cyclists, and it is our shared responsibility to see that it is managed effectively, fairly, sustainably and in the spirit it was intended.

©2012 Sharing the PCT. A not-for-profit organization | Website by Immersion Media